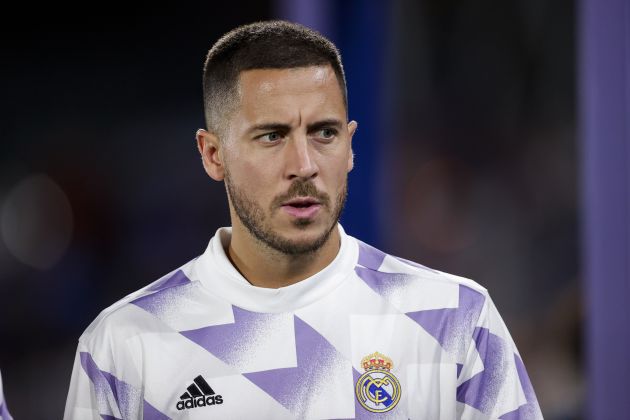 As Real Madrid prepare for their return to action, there has been plenty of speculation around how they might rotate and rest their players going into the early stages of January.

Luka Modric, Eder Militao, Rodrygo Goes, Vinicius Junior, Eduardo Camavinga and Aurelien Tchouameni all got to at least the final eight of the tournament and three of them will only finish up their international commitments this weekend.

Carlo Ancelotti has previously remarked that Los Blancos may even use an entirely different team in the opening weeks of the season.

Two of the World Cup internationals back sooner than expected are Thibaut Courtois and Eden Hazard, who went out in the group stage with Belgium. Theoretically, it might allow Hazard more chances in the opening games, having come back earlier.

Many have given up hope in Hazard turning his Real Madrid career around, but according to Roberto Martinez, Hazard is not one of them.

“What he wants is to give Madrid fans their best version. He is not a player who needs to go abroad, he wants to succeed at the white club.”

Martinez made the comments to Cadena SER, before going on to explain that he never had doubts about whether he should be with the national side.

“I know how difficult his last two years have been for Eden as a footballer at club level. He has had too much time to think, it has been very hard, he has committed himself 100%, he wants to succeed at his club.”

“It is not easy because there is always that noise, that doubt of a player who is not playing every weekend. He is a unique player, who has taken the number ’10’ to another level. For us there was no debate as to whether he had to be in the national team or not.”

Despite being captain, he was dropped for their decisive final group game against Croatia, only coming on for the final few minutes.

Martinez’s reference to the mental struggles Hazard has been through in recent years confirm that he is no longer as tranquil in his mind on the pitch. Without repairing that first, it is difficult to see him mounting a comeback.