After their “shocking” defeat against Japan, the German National Team sit in a very tight spot in the group.

But was it really that shocking? Here we take a look at some of the details of Germany’s match against Japan.

Here at Bulinews, we wrote an in-depth analysis prior to the World Cup about the possible weaknesses the German National Team could have during the tournament, and Japan exploited each one of them.

Hansi Flick’s boys were in control of the match during the first half, Germany even had the most passes ever in the first half for a brief period until Spain rolled past Costa Rica, but they were not the extent of some clear chances by the Japanese squad.


The lack of accuracy to capitalize on their chances was what turned the game towards the Samurai Blue.

The defensive scheme Hajime Moriyasu had planned was performed almost flawlessly by the Japanese lines.

The 4-4-2 formation made things difficult for the Germans, but they made it even harder for themselves. 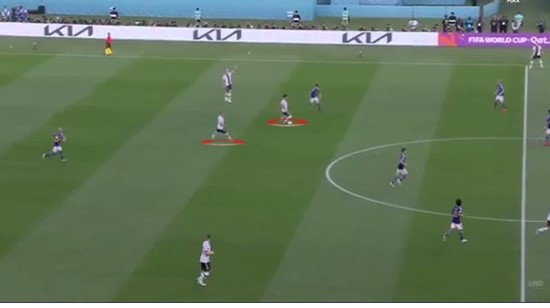 Kimmich and Gündogan stepped over each other too often during the match; both midfield maestros like to operate in the same way, being near the zone of the play and directing the build-up.

The problem was that they got too close too often, helping the Japanese pressing instead of improving the movement of the ball. 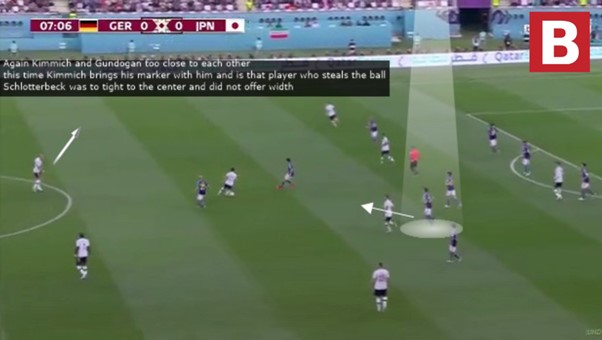 That play ended in a called-off goal by Japan.

The 4-4-2 had their instructions very clear: Maeda was the pressing trigger, jumping to direct the first pressing and especially to block Rüdiger as much as possible, his companion was usually Kamada but every other midfield player could step up if the play demanded it.

Japan always forced Germany to play it back, with the pressing trying to direct the ball towards one of the sides if the ball came from the middle of the pitch, or leading towards the center if it was the other way around, but always with the clear order of not allowing Germany to change the sides of the play quickly.

Moriyasu’s plan of pressing high to avoid a quick german build-up and then retreat to their solid middle block whenever the first pressing line was overrun limited Germany’s options. 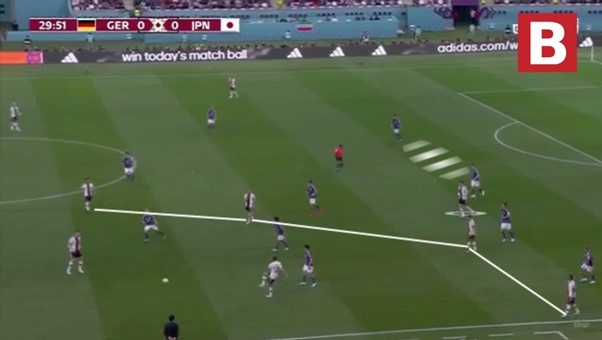 The lack of movement between the lines and the accumulation of players in a specific area without freeing the far man bottled the attacks.

Even with these overloads of creative players, the German national team were not able to really combine passes and build a progressive play. 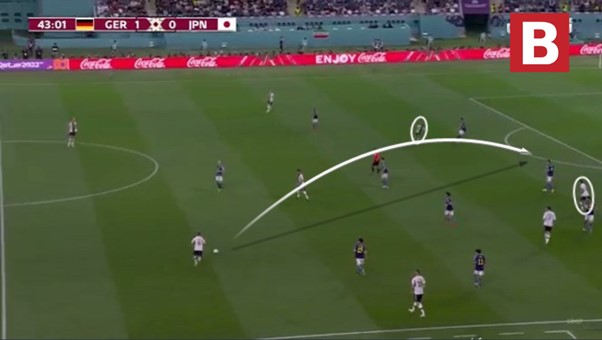 Here we can see how the positioning in the progression phase made the job easier for Japan.

Gündogan and Kimmich were too close and almost on the same line, without creating any passing advantage or option; Süle was also very close to Müller, while Musiala had drifted towards that side in the previous play.

All of the players were attracted by the ball, but their movements only made things easier for their markers.

Havertz, for example, didn´t interpret that his position should have been the one shown between the RB and the CB in order for him to fix the defenders and allow Raum and himself to attack the space.

With all the players this close, the pressing from the Japanese side was quicker and more efficient. 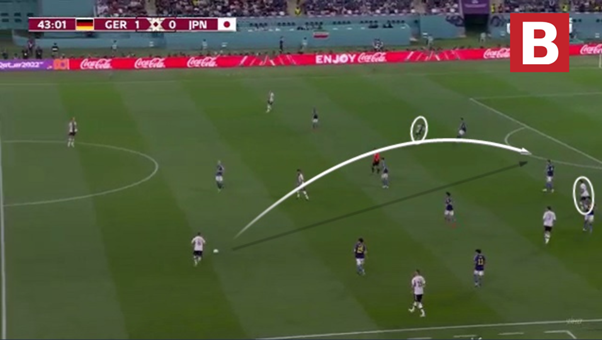 Here´s the other side of the coin, one of the few, as Müller positioned himself between the LCB and the LB while Musiala paired with the RCB and Raum progressed.

They were able to make the defense doubt and Kimmich connected a good ball to Musiala to create a goalscoring chance.

There were 19 ball progressions from GER to 12 from Japan, and if we trust FIFA’s official counting in their post-match report, the passes were shocking.

According to this report, Kai Havertz received only one pass from Joshua Kimmich, and 0 from Thomas Müller, whether it’s 100% accurate or not, it can’t be too far away. 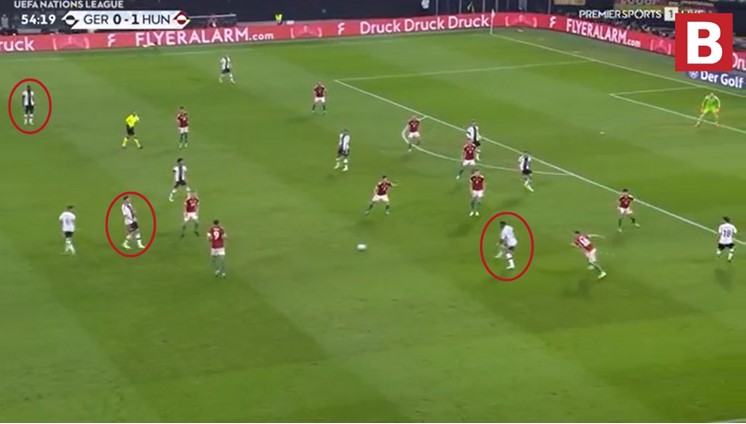 Remember this play against Hungary? Where 9 of the 10 outfield players were within the space of the box?

This was the German National Team´s distribution according to FIFA, we can see how they get closer and tighter as they progress through the pitch.

If we compare it to Spain, despite them playing a much weaker opponent, the difference is very relevant as Luis Enrique´s side maintained the width of the pitch during the build-up (58m) and the progression phase (59m) and tried to exploit the gaps between the center-backs by doing this. 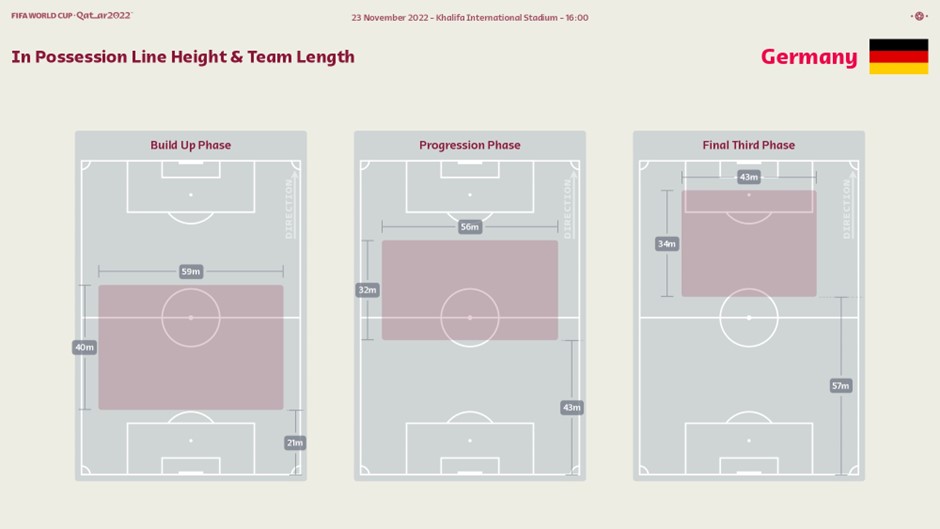 The lack of plays through the wings start with the problems at the right-back position.

It’s not a knock on Süle, he is a center-back and has his traits, but the Japanese squad had the ideas clear with the big man: pressing him whenever you can, but if they had to leave any man open, let it be Süle, they knew he wasn’t a threat with the ball or overlapping the winger.

Partnering him with Serge Gnabry did not work either, as the Bayern player, despite trying to give some width to the team, is more of a combination type of winger than a vertical speedster.

Talking about speed, they lacked every footballing definition of it.

The only one able to change the rhythm of the plays and generate something with a spark of brilliance was Jamal Musiala, the team looked slow with the movements of the ball.

Ilkay Gündogan had a very good game but seemed to force things sometimes.

David Raum was the best option to play through the wing, the left-back was his usual self with the crosses and attacking the opponent’s back, but seemed a bit nervous with the ball despite his good performance producing the penalty.

The problem was Raum wasn´t connected with passes frequently despite having good positioning, the one clear time he was found he created the pen. 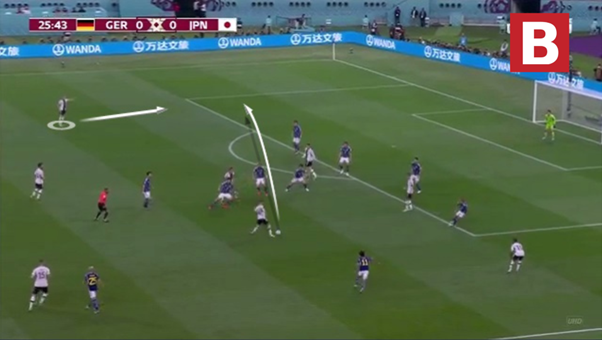 Germany only made 5 switches of play throughout the game and were very slow transitioning from one side to the other, it is fair to say Japan did well blocking this.

We knew it could happen

The strength of the defensive line has been a question mark for years now, and certainly, it’s not a surprise it cost Germany goals and points.

It’s a shocker in the sense that 2 Borussia Dortmund and 1 Real Madrid defender are the ones involved, but we saw how they struggled during the Nation´s League.

Nico Schlotterbeck looked vulnerable during the whole match, being constantly targeted and surpassed; Japan knew Raum would leave that space open to attack through that side.

The team was also quite slow in the defensive transitions, with a particular lack of involvement from the 4 players up-front. 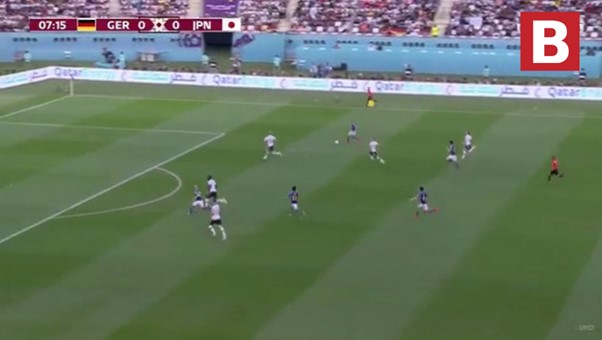 It’s nonsense to demand Thomas Müller to participate in the defensive transition, but Serge Gnabry certainly should run for it.

In Japan´s offside goal, there was a 5v5 counterattack by the men in blue and with no other German player in sight after Gündogan’s loss.

The individual and collective errors of the defense are worrying, especially with the match to come.

The struggle the defensive line has with long passes behind the center-backs needs to be fixed as soon as possible if they want to continue pressing high.

On the bright side, their high pressing and counter-pressing were very good all the way up until Japan changed their tactics.

At the start of the second half came the change that broke the game, and it could have gone either way to be fair, but in the end there was only one winner.

Don’t get it confused, Japan won fair and straight; yes, there were mistakes made by the German players, but it was not a gift, the Samurai Blue made their chances worth and played an excellent game.

The plan of subbing Tomiyasu in and changing the formation was thought deeply before the match.

Takefusa Kubo said it in a post-match interview: “We started to lose presence in the pressing, so the coach took me off and we changed to the 3-4-3, it was in our plans but we had to make the change earlier because we were losing, it worked perfectly for us”

With the change in formation, the Japanese squad took a gamble by pairing 1v1 almost throughout the whole field. 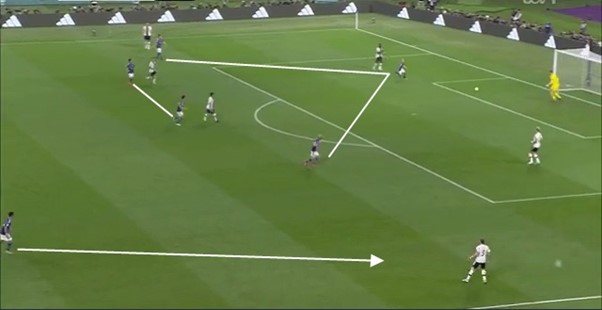 The three players up front matched the three German defenders, while the central midfielders paired with the double 6.

The wide players and the three Japanese defenders stepped up to their man when the play started to move towards their side, with the CBs following the german strikers as far as needed to avoid letting them turn around.

Whenever the first line was overrun, the block became a 5-4-1.

This gamble was “safe” in the sense that Hansi Flick did not have any forward who could sprint into space or attack the defender 1v1, as Leroy Sane was ruled out.

Here’s where Leon Goretzka’s substitution made sense, Gundogan was running out of legs and the Bayern player is a more physical presence for the back-and-forth game and winning the second balls. Although his performance did not pay off.

As Japan swiftly started to gain ground with their direct transitions, the Germans started to get rattled and did not adjust their defensive movements, pressing high without the legs for doing so. 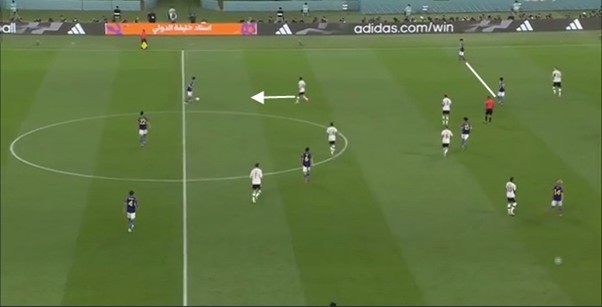 With the first goal, Jonas Hofmann went on to press too high and far to make a worthy impact instead of trying to cut a passing lane.

As Niklas Süle pushed wide to close in on Asano, he was getting targeted with a 2v1 as Goretzka wasn’t quick enough to help him.

As a detail, Bastian Schweinsteiger mentioned in his analysis how Süle showed Asano the inside of the pitch while covering instead of the outside; Süle did the same thing minutes earlier in the play that ended up with Manuel Neuer’s amazing save.

The second goal was a collective error from the defensive line combined with a great movement of the Samurai Blues.

Schlotterbeck’s back was attacked as he was covering the player in front of him, Rüdiger elected to play the offside instead of pursuing but Süle made him onside.

That can happen, but we can see how both Rüdiger and Süle were still on time to help Schlotterbeck, even though he should have been stronger in the duel.

The next game is do or die, the German National Team need to imperatively be stronger and more accurate in both boxes if they want to achieve their much-needed win against the strongest team in the group.

But above all, they need to show their character, their personality; they need to play with intensity, confidence and will need not only to face Spain but to represent their national team the right way.

More about the match

Gündogan slams Germany’s performance in loss to Japan: “Not everyone wanted the ball”
German press player reviews: Musiala, Kimmich, Gnabry, and Gündogan earn praise while Schlotterbeck takes heat
Germany player ratings versus Japan
FAZ and Zeit editorials after loss: “Boycotting made easy.”
Flick discusses reasons behind Germany’s defeat to Japan
Kicker Editorial: Flick erred in subbing off Gündogan
German players and pundits deliver unsparing criticism following loss to Japan
Japan come from behind to cause another World Cup upset
German players cover mouths in team photo ahead of Japan game amid armband spat
Confirmed lineups: Germany – Japan
Flick and Kimmich share thoughts on OneLove armband ban
Flick confirms Müller is an option for Germany’s opener against Japan
Confirmed: Sané to miss out against Japan
Musiala: “We have the quality to go far in the tournament”
Germany vs. Japan preview: Team news and predicted lineups
Kehrer speaks about favorite position, says West Ham move “paid off”
Gnabry: “We are in good shape”
Bierhoff gives update on Füllkrug after absence from training

More about the teams